I know this is rather long but I have been asked questions on this topic by a number of people over the past several months:

As many of you are aware, the Libertyville Sports Complex has been closed since March due to the COVID-19 pandemic. Since the pandemic started, I have had a number of questions concerning the Sports Complex and our Parks and Recreation programs. I would like to share some information with you so our residents can help make decisions on the Sports Complex and our parks and recreation programs for the future. The Sports Complex closed in mid-March. The closing affected all portions of the Complex including the fitness center, sports courts and the privately leased sections of the buildings. Due to the layout, costs of operating the facility, and state COVID-19 regulations, it has not been feasible to open portions of the building during the pandemic. In order to reduce losses from the costs of covering the bonds on the facility the Board has investigated leasing the building to the Greater Libertyville Soccer Association for three months this winter. The Soccer Association is able to use the building during the current pandemic by following specific health guidelines.

The Libertyville Sports Complex consists of three separate entities. The corner property at the intersection of US Highway 45 and Peterson Road is a miniature golf course, the middle property is the golf driving range and the building is the Sports Complex itself. There is currently $12, 945,000.00 in outstanding debt principal on the properties with bonds that will be paid off in 2030. The Board has been attempting to sell the miniature golf and driving range property for a number of years. The miniature golf course and driving range are currently under contract and we hope to close on that property in the first quarter of 2021. The Libertyville Sports Complex was constructed in 2001-2002 and has always operated at a loss of over a million dollars a year. The money to subsidize this deficit has come from General Fund sales tax revenue rather than the Sports Complex Fund since the Complex does not generate sufficient revenue to pay the costs of programs and debt. The Village has spent over $6,500,000.00 subsidizing the Sports Complex just over the past five years. These costs include the cost of paying down the debt principal and interest on the property. In the next five years approximately $4,000,000.00 will be required for capital maintenance of the building due to its age. The Sports Complex is heavily utilized by our residents and people from the surrounding communities. However, the fees paid for the use do not cover the cost of operating the facility. The Sports Complex is used by many of our local youth sports groups and is an important part of the Libertyville Parks and Recreation Department.

We have recently been approached by a company interested in purchasing the indoor Sports Complex. The company would continue to run the facility as a sports complex on a private basis. In looking at the sale of the property the Village Board is looking at ways to ensure that our residents and local sports groups will continue to have use of the property. The sale of the property would allow the Village to stop subsidizing the property and pay off the debt in the next three years. This would allow the funds currently used to subsidize this debt to be used for roads and other capital needs. One main difference between Libertyville and our surrounding communities is that we do not have a separate Park District. The Park Districts in the surrounding communities are separate taxing bodies with tax rates that vary from $0.42 to $0.68 per $100.00 assessed valuation. In contrast, the Village of Libertyville rate is $0.66 per $100.00 assessed valuation which includes our parks and recreation budget as well as all of the other Village services including police, fire, public works, building and administration. In the event a park district were formed in Libertyville the property tax costs to Village residents would increase although additional programs and services could be provided.

Based on the closing of the Sports Complex and pools this summer several residents asked me what it would involve to form a park district in the Village of Libertyville. They noted that pools were open in Vernon Hills and Mundelein this summer while the Libertyville pools were closed. I promised to respond to residents explaining the necessary steps to form a park district and why there was a difference between Libertyville and the surrounding communities. Mundelein, Vernon Hills and Gurnee all have separate Park Districts while Libertyville’s parks and recreation programs are operated by the Village. The Park Districts receive funding through property taxes. They have separate boards running the districts and separate staffs managing and operating the programs. As a result, property taxes are typically higher in communities with park districts. The park districts were able to maintain services during the COVID pandemic since the majority of their funding comes from property taxes which were not severely impacted during the pandemic.

To form a separate park district in Libertyville the following steps would be required: 1. A group of interested citizens would seek a competent attorney to draft the boundaries of the proposed district and petition. 2. Qualified persons would submit a petition with at least 100 signatures to the Circuit Court of Lake County where it would be assigned to a judge. 3. A circuit judge would hold a public hearing. 4. If there were no objections at the public hearing, the judge would order a question placed on the ballot. 5. The ballot contains the organizing question/levy plus at least five candidates for Park Board and five write-in spots. 6. Park Board candidates can secure a spot on the ballot with 25 signatures. The unincorporated areas and the villages of Mettawa and Green Oaks could be included in a new park district since none of these areas currently have a park district and their residents often utilize the Village’s parks and recreation department.

However, it’s important to note that the current parks in Libertyville belong to the Village and would not necessarily be transferred to a new park district since the parks have been paid for by the residents of the Village of Libertyville. In the event the new district wanted to operate the Sports Complex they would have to purchase it from the Village or assume the current debt and obligations on the property. I am not advocating for a new park district in Libertyville and I believe the residents are best served by the current operation of our Parks and Recreation Department. While some of our programs and facilities have suffered due to the current pandemic and economic environment, I believe that we offer the best use of your tax dollar. However, it is possible to form a Park District if the voters and residents of Libertyville and/or the surrounding areas decide it’s in their best interest. 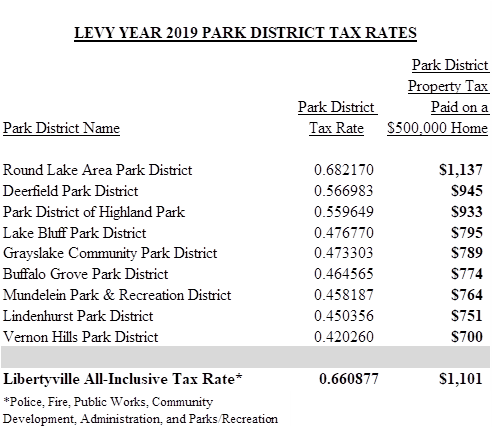